Among the Historic Hotels of Mexico, we find Hotel Mansion Iturbe. Located in what formerly was the Plaza Mayor of Patzcuaro, the Vasco de Quiroga Square today captivates both local residents and strangers for its breadth and the harmony of the buildings that make it up.
On the north side of the great square stands the Mansion Iturbe, an example of the Patzcuarense manor house. A jewel of the Novo-Hispanic architecture, it is part of the architectural heritage of Pátzcuaro and listed as a Historic Monument by the National Institute of Anthropology and History.

According to research by José Manuel Martínez Aguilar, Architect and Doctor of History:

“this property has its antecedents in the distant 1540s immediately to the founding of the city. At this time, the first bishop, Don Vasco de Quiroga, moved to Patzcuaro the seat of the diocese of Michoacán de Tzintzuntzan. There then appeared the first houses of the Spanish families, who accompanied the bishop to this place. These were simple buildings of one level, located in large plots, made of adobe walls, with a beamed ceiling and roof.

In the seventeenth century, in the northern part of the Plaza Mayor, the Mansion Iturbe and six other single-level houses were located, which belonged to the same person. This area was known as ‘Las Casas del Empedrarillo.’ With regard to the Mansion, the building was located at the corner of Calle de San Agustín - today Iturbe Street - and it was the home of the familiy on the top floor. Meanwhile, on the first floor I had the entrance for the errands, courtyards, orchard, backroom and shop where all kinds of products from the Manila Galleon were traded.””

Towards 1780, the deteriorated store-houses were removed and in their place Don Manuel de Abarca León, governor and provincial mayor located his residence for some years.

In 1790, the Mansion changed ownership, being acquired by Don Francisco de Iturbe y Heriz. He was a native of Vizcaya and representative in Pátzcuaro of the business of Colonel Emeterio de Iturbe Iraeta, a House of Muleteers “Casa de Arriería” which his uncle established in Mexico City. Don Francisco eventually became one of the most influential men in Pátzcuaro, thanks to trade between Acapulco, Valladolid (now known as Morelia), the Bajio Region, and Mexico City.

Francisco de Iturbe y Heriz was born in Vergara at the Basque Country on northern Spain on September 20, 1768. He moved to New Spain in 1784 and settled in the city of Pátzcuaro. From his marriage to Doña Josefa Anciola del Solar and Pérez Santoyo, he had 5 children: 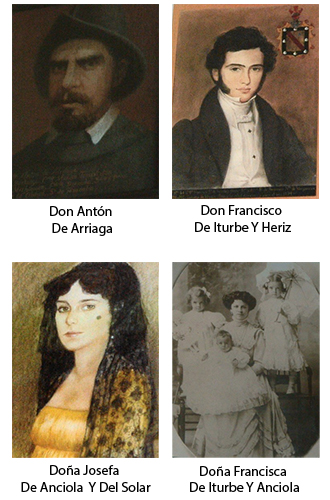